As many of you know, I now work for Google on the Play Games Team. We provide APIs for game developers, implementing useful features like leaderboards and achievements, so the developer doesn't have to. While many Android developers are using our services, adoption on the web could be better, so lets take a look at how to integrate the Google Play Games Services achievements into a web game.

Become a Google developer and have added the game to the Developer Console. I've done this with my Snake game: 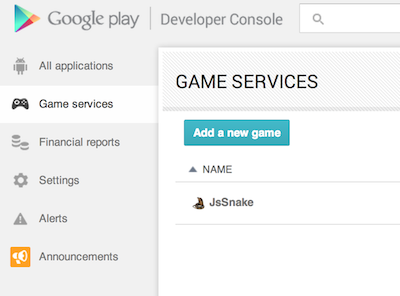 Link the game to at least one web URL: 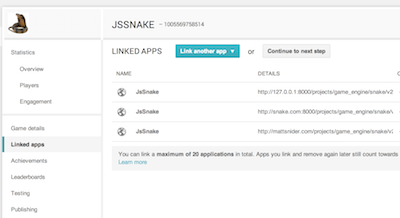 Create a couple of basic achievements for your application: 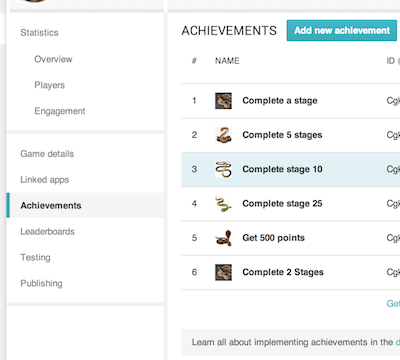 Set your Google+ email up as a trusted tester (or publish your game so anyone can log in):

Here is the achievement setup screen: 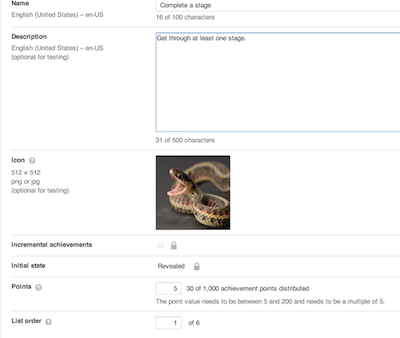 To use play services, players must first authenticate with G+[2]. For the simplest method, include the following in the header of the page:

And the G+ button:

And the necessary G+ JavaScript:

Once authenticated you can begin to use the Games API[3]. To fetch and store a list of the achievement definitions:

Before calling APIs on behalf of the player, fetch the player object for the authenticated user:

To fetch a player's achievement progress:

To complete an achievement:

To increment an achievement:

This is a dense article and mostly everything is shown through examples above, so I will keep the writeup brief. The first step is to become a developer on Google[1] and use the console to create the artifacts for your game. It’s pretty straight forward, but will cost a one-time fee of $20.

The two tricky parts to setup are linking an app to a game and setting up trusted testers, if you do not publish the game making it public. For the purposes of a web game, linking an app means entering the URL for the game. Each URL will have its own entry and therefore its own client ID (which goes in the header meta information). You can have any number of linked apps, so have at least one for production and one for development. If you have trouble authenticating G+, make sure the URLs are correct and that you are using the right client ID. Trusted testers are the email address of people who can authenticate against your game, even if the game isn’t published yet. These emails should be the G+ account of testers, and allows developers to authenticate before the app is publicly available.

Unfortunately, since Google Play Games Services is a Google product, it currently only uses G+ for authentication. I think this is limiting, but hopefully a better authentication story can be found in the future. Once, the user authenticates you need to create/fetch a player ID for them from the Games service (shown above). You will have a limited amount of information about the player on the player object, but more importantly can now start calling Games services APIs for your game on the player’s behalf.

To see a working web implementation, see version 3 of my Snake game.

I have shown how to work with Achievements, but leaderboards and turn-based multiplayer work much the same. Additionally, once you adopt our services, you have already done the hard work and will be ready for new features which we are frequently adding to the API.

Currently, all APIs are REST and the only optimizations built into the APIs are URL caching through headers. I have been playing with automatic client-side storage of GET requests, but there is a lot of room for improvement. Additionally, it would be cool to build a more developer-friendly wrapper around the REST API to increase adoption. If anybody takes this task up, feel free to reach out to me for reviews and help.

A Little About Me

I’m Matt Snider and I write about web application development.